False injections in wildfire plume rise simulations are partly due to the assumed radiant fraction of heat flux being 0.5–25 times higher than observations, according to an evaluation of a common plume rise parameterization against aircraft observations during the 2019 Western US wildfires.

The power of smoke

In the summer of 2019, I rode along on a science flight on the NASA DC-8 aircraft as it flew through wildfire smoke plumes over Idaho and Montana. As a smoke modeler, I wasn’t tending to an instrument, so I was free to wander about the cabin. At one point, we flew directly through the updraft of a small cloud (known as a pyrocumulus) that had formed above one of our target fires. The maneuver nearly knocked me off my feet, but it also helped me (a new graduate student, still a month out from starting my PhD program at the time) connect with the powerful forces that shape smoke plumes.

The science flight was part of Fire Influence on Regional to Global Environments and Air Quality (FIREX-AQ), a joint NASA-NOAA field campaign that sought to understand the complex physics and chemistry of wildfire smoke. During the Boise deployment of the campaign the DC-8, accompanied by two NOAA Twin Otters and a suite of ground based mobile laboratories, observed smoke from over 35 individual wildfires.

It’s no secret that wildfires are a growing concern for health, air quality, and visibility in the Western United States. Climate studies have linked the increasing trend in wildfires with anthropogenic warming, and the trend is expected to continue into the future. Recent events have shown that the impacts of western us wildfires are no longer confined to the west. In 2020 both my parents in San Francisco and my step-brother in New York City were impacted by smoke from the record breaking wildfires of that season (i.e., the August Complex fire). This is because many of the smoke plumes that summer were lofted out of the planetary boundary layer (the lowest layer of the atmosphere, where you and I live) into a region of the atmosphere known as the free troposphere. Here, the air is able to move swiftly, with little friction from the ground. Any smoke that makes it to this layer is able to cover great distances (i.e. San Francisco to New York City) in just a few days. In cases where injection does not occur, smoke tends to stay closer to the area where it is emitted. Therefore, accurate predictions of whether the smoke will remain in the boundary layer (non-injection) or whether a significant portion will make it into the free troposphere (injection) can help members of the public mitigate exposure to wildfire smoke.

Our study evaluated the ability of the 1-dimensional convection model developed by Saulo Freitas to correctly forecast smoke plume injections into the free troposphere. The Freitas model is embedded in 3-dimensional air quality forecasting systems and calculates the smoke top height for every model point containing a wildfire. Previous studies have evaluated the Freitas model against satellite observations of smoke top height and found that the Freitas model overpredicts the frequency of smoke injection and underpredicts the range of plume top heights compared with observations. Since smoke injection height drives the extent of air quality impacts, overpredicting plume injection means that air quality forecasts for the general public might miss episodes of poor air quality near a fire. In this study, we look at the Freitas model in two state-of-the-art air quality forecasting systems, the Weather Research and Forecasting model coupled with Chemistry (WRF-Chem, UCLA version) and the High Resolution Rapid Refresh Smoke Model (HRRR-Smoke, NOAA Global Systems Laboratory). We evaluate the performance of this model and pinpoint model fire intensity assumptions as a major contributing factor to its shortcomings using observations from FIREX-AQ.

We compared the models to lidar measurements of smoke plumes taken using the NASA DC-8 aircraft during FIREX-AQ. Models forecasted plume injection into the free troposphere in 59-95% of the cases studied, whereas injection was only observed by the DC-8 in 35% of cases.  An infrared camera aboard the aircraft allowed us to pinpoint fire intensity as a leading cause of the high rate of modeled injection. The camera measures the amount of radiant energy (like the heat you feel when standing next to a campfire) released from the observed wildfires. This allows us to compare modeled and observed estimates of fire radiant heat flux (radiant energy per unit area per unit time). Our paper shows that the 1-D Freitas model in HRRR-Smoke and WRF-Chem assumes that fires burn with up to 25 times more radiant heat flux than real fires. This directly translates into overly buoyant plumes which inject into the free troposphere when they should remain in the boundary layer. We also show that uncertainty in the way models represent the planetary boundary layer and mountainous terrain can also account for some of the error in the WRF-Chem model.

For the final piece of our study, we re-ran the smoke forecast models, passing more realistic radiant heat flux values to the 1-D Freitas model. This resulted in improved performance, with the models predicting injection in 33-75% of cases (compare to 35% injection in observations).

We discovered that the Freitas plume height model, embedded in HRRR-Smoke and WRF-Chem, over-forecasts the occurrence of smoke injections into the free troposphere because fire radiant heat flux is overestimated by a factor of up to 25 compared with observations. Our work will help improve fire-related air quality forecasts (particularly real-time, publicly-available models like HRRR-Smoke), which will become increasingly important in a hotter, drier, and more fire-prone world. 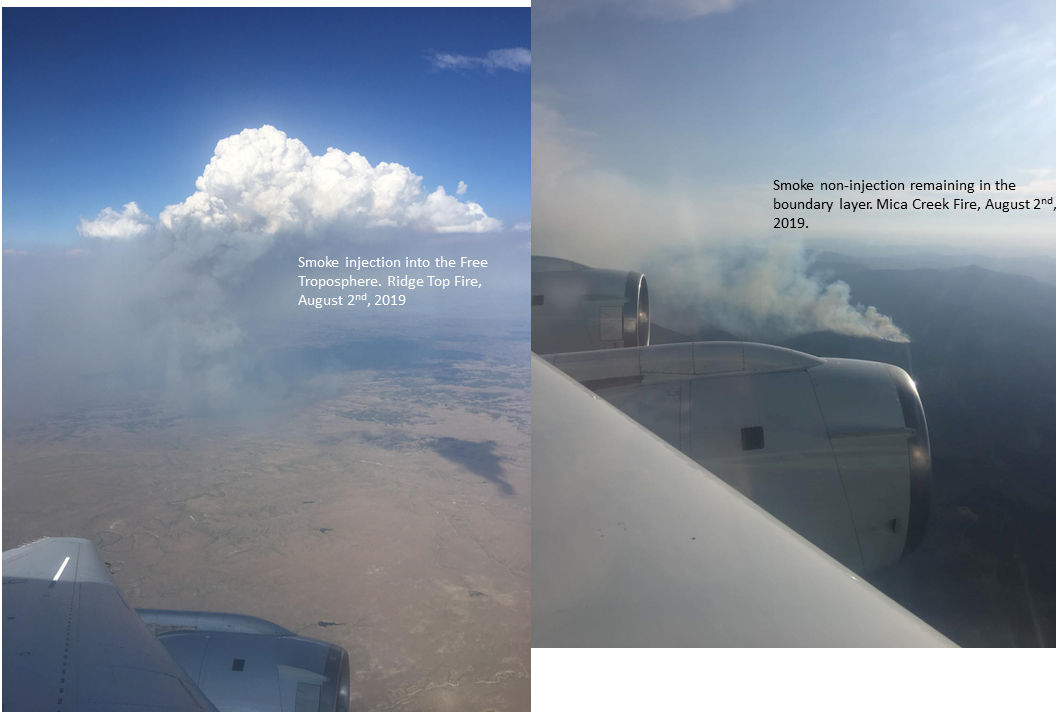