A Community from Nature Portfolio
Behind the Paper

Aerosol suspended in the air play major roles in climate by absorbing and scattering sunlight and by acting as cloud condensation nuclei. Aerosols can reduce visibility and detrimentally affect public health.
Marcelo Guzman
Associate Professor, University of Kentucky
Follow
Like Liked by Evelina Satkevic and 1 other
0

The heterogeneous reaction between thin films of catechol exposed to O3(g) creates hydroxyl radicals (HO•) in situ, which in turn generate semiquinone radical intermediates in the path to form heavier polyhydroxylated biphenyl, terphenyl, and triphenylene products. Herein, the alteration of catechol…

Smoke from wildfires can be transported long distances providing material that create new aerosol particles. At the same time, these particles are transformed by oxidizers creating an unhealthy mix of organic molecules and ozone, both  found in smoke.

In a new laboratory studied titled "Interfacial Oxidative Oligomerization of Catechol" our group at the University of Kentucky revealed how ozone can transform the organic molecules during surface reactions taking place in such smoke plumes. The work, provides the key coupling reactions of molecules emitted, and oxidatively transformed, during wildfires, combustion in power plants, and other natural and industrial processes. The research serves as an example to explain how aromatic molecules contribute to the formation of light-absorbing oligomers under variable relative humidity, which are important secondary organic aerosols. The significant generation of new biphenyls and terphenyls of catechol in the laboratory model pollution plumes implies the formation of quinones and the participation of semiquinone radical intermediates.

Phenols exposed to background ozone gas and hydroxyl radicals during atmospheric transport should result in the formation of light absorbing oligomers. Understanding the major transformations of phenols from smoke in the atmosphere is a major challenge and this research considerably advances previous knowledge about the role of interfacial chemistry.

The chemical processing of such pollution plumes can create brown carbon aerosol from wildfires, which in turn could contribute to absorb more heat from the sun causing the atmosphere to warm up. 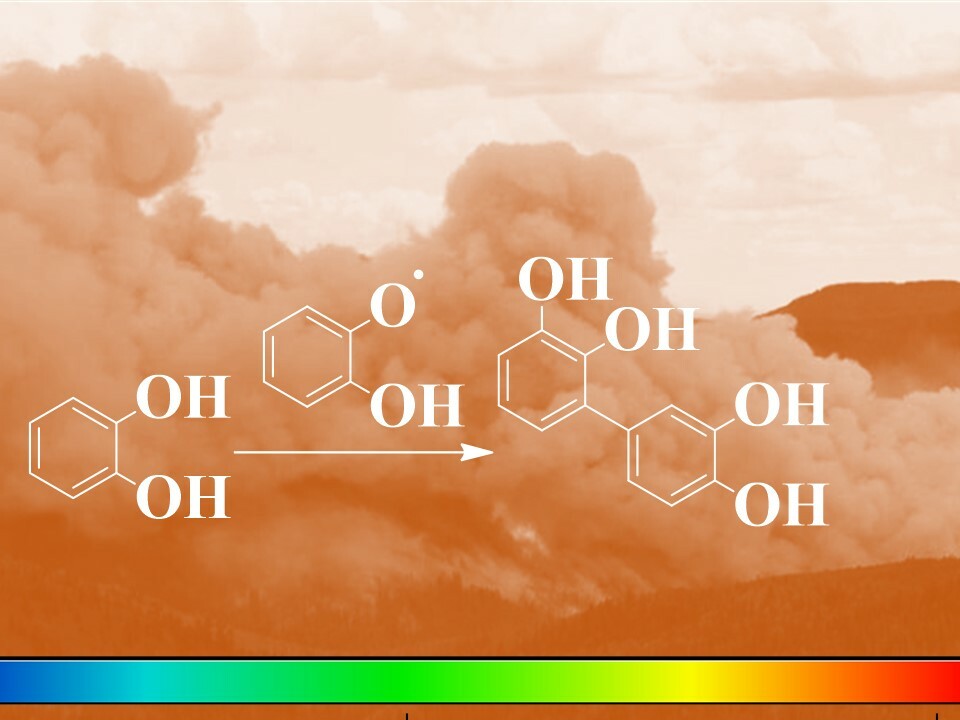 Aerosol suspended in the air play major roles in climate by absorbing and scattering sunlight and by acting as cloud condensation nuclei. Aerosols can reduce visibility and detrimentally affect public health.