The atmosphere contained only slightly more CO2 than today 410-380 million years ago, and this did not change much when trees emerged ~385 My ago. This rejects a long-standing paradigm that the evolution of trees with deep root systems led to massive CO2 removal.
Tais W. Dahl
Associate professor, University of Copenhagen
Follow
Like Liked by Evelina Satkevic and 2 others
0

Dahl et al. present new evidence based on leaf gas-exchange in primitive vascular plants and fossil remains of some of their earliest ancestors. This alters our thinking on how plants impacted the Earth System and climate.

The concentration of CO2 in the atmosphere has changed as sources and sinks have varied over the course of Earth’s history. How the greening of the Earth by land plants has influenced the climate in the past is heavily debated, and without a quantitative understanding of natural CO2 removal processes it is difficult to develop a framework for nature-based solutions in today’s climate crisis.

Traditionally the appearance of the first forests, including Archeopteris trees towering 30 meters above the ground ~385 million years ago (Ma), and the subsequent evolution of seed plants ~360 Ma have been associated with a dramatic atmospheric CO2 decline.

The hypothesis that trees drew down atmospheric CO2 levels first came from theoretical considerations because CO2 removal due to silicate weathering via dissolution of minerals and then subsequent carbonate precipitation is far greater in vegetated areas than on non-vegetated land. Soon after, additional arguments even stated that high CO2 levels in the atmosphere ~400 million years ago were required to compensate for the ~3% weaker insolation from the Sun. The first observational evidence supporting this hypothesis came from proxy data from an ancient soil profile. Here,  CO2 locked into goethite – an iron mineral with capacity to incorporate CO2 from the soil solution – offered a mechanistic relationship between atmospheric CO2 concentrations and observations made in the ancient soil. The approach made several assumptions that could not be tested, and it has never been applied to modern soils or at any other time in geological history, but the proxy data  supported theoretical expectations that atmospheric CO2 levels were up to 16 times higher than today ~440 million years ago. Then, additional support for high CO2 levels came from observations of fossil plants, since some early vascular plants have few stomata (i.e. pore openings) in the plant tissue through which plants exchange gasses, such as CO2 and water vapour. To avoid desiccation, land plants have likely evolved to minimize water loss by evolving fewer and smaller stomata. With high CO2 levels in the ambient environment, it was argued that early plants could evolve a lower stomata density and a smaller stomata size compared to modern plants. However, the approach was only applied to extinct lineages of plants (Zosterophylls and Rhyniophytes). But when looking at data from the oldest vascular plant fossils with living relatives (e.g. lycophytes the club mosses), the result actually turned out to be the opposite: ancient lycophytes have the similar stomata density as modern plants, and they turn out to be physiologically comparable to their modern descendants. Data from carbonate precipitated in ancient soils followed up and suggested a declining  CO2 trend, although this trend could also reflect development of organic-rich soils with more respired carbon present in the soil solution.

Every time new lines of evidence were presented, the previous conclusion was consolidated and found to be “consistent with” the idea that atmospheric CO2 levels were far higher than today before forests emerged on Earth.

To falsify the hypothesis, we would need to not only assess the uncertainty of existing proxies but also develop a better mechanistic CO2 proxy where all involved parameters could be constrained resulting in the producing CO2 estimates that have sufficient precision and accuracy to test the original hypothesis.

Franks et al. 2014 provided a biophysical model for the gas exchange in land plants. In this model, the rate of CO2 assimilation, water conductance, and ambient CO2 levels could be derived from observations made on the plants themselves, including measurements of stomata density and size, and the carbon isotope composition of plant tissue relative to contemporaneous air. We calibrated this model for lycophytes and tested how well we could predict ambient CO2 levels in the greenhouse from modern lycophytes that had been growing in there for eight years. Our results showed that we could predict the CO2 level with an accuracy of ~100 ppm (parts per million), sufficient to test the conundrum of early forestation.

Measurements of the carbon isotope composition of fossil plant tissue are challenging for several reasons. First of all, the analysis is destructive, and the oldest plant fossils are precious and should not be destroyed. Secondly, fossils are often preserved as imprints with no original organic matter preserved. Third, the tiny amounts of carbon preserved from a plant should be measured without contamination with other sources of carbon. When overcoming these challenges, we derived a CO2 level of 532 ± 77 ppm from the Baragwanathia flora in Australia – fossil lycophytes thought to represent some of the earliest vascular ecosystems.

Although, the studied specimens were not from the oldest fossil assemblage (Late Silurian), we realized that Baragwanathia is shrouded in mystery. One study has even proposed Baragwanathia was a marine plant. Therefore, we followed up and collected data from ancient lycophytes including the common plant Drepanophycus found in nine distinct geographical localities and Asteroxylon from the exceptional Lagerstätten deposit Rhynie Chert in Scotland.

All fossils gave essentially the same answer. The estimated atmospheric CO2 level from 410-380 million years ago was between 530 and 715 ppm.

With lower atmospheric CO2 levels than previously thought, we used a paleoclimate model of intermediate complexity (CLIMBER-3a) to assess the consequences for the climate and temperature distribution in the Early Devonian under the weaker Sun. It was clear that Earth’s climate was far from a snowball state, but ice must have been present at the poles. In contrast previous models that assumed higher CO2 levels suggested Earth was in a “greenhouse state”. However, there is no evidence that the poles were ice-free 410-380 million years ago and available paleotemperature records fit a model with 500 ppm CO2 equally well to a model with 2000 ppm CO2 in the atmosphere. Hence, the average temperature and the temperature distribution of the early and middle Devonian world would have likely been similar to today.

How can the evolution of trees not affect atmospheric CO2 levels?

Small shrub-like vascular plants evolved in the Silurian long before the emergence of progymnosperm forests. These plants have similar nutrient demand (e.g. C/P ratio) as trees, but due to their shallow and simple root like system, they probably had poor capacity for nutrient retention in the soil. Therefore, early vascular plants likely had a high weathering demand compared to more evolved plants with complex and deeper root systems. In our view, the evolution of trees therefore enhanced the nutrient retention in the soil, which would have limited continental weathering.

We do know that forests can efficiently recycle nutrients today compared to shallow and simple vegetation. For example, when rain forest is burned down (e.g. slash-and-burn), the nutrients locked into the above-ground biomass become available and fertilize the growth of crops on the scorched land mass for a period of time. Yet, nutrients are easier lost from these newly establish agricultural systems than from rain forest, so the vegetation will require an external nutrient supply (e.g. further deforestation).

With the emergence of deeper root systems – and subsequent seed plants, it is plausible that the total area of vegetated land did increase and that would likely have contributed to increased CO2 removal via silicate weathering in areas that were formerly sparsely vegetated. Early progymnosperm forests are found on most paleocontinents, but vegetation may have still been sparse in the continents’ drier interiors.

The early shrub-like vegetation, including club mosses (e.g. lycophytes) have a more opportunistic life style. They send out ‘runners’ (e.g. as do strawberry plants) that enable them to move relatively fast and chase optimal habitats, wherever they can avoid desiccation. This habit may have increased the acquisition of nutrients via chemical weathering. With the Silurian emergence of early vascular ecosystems, fine-grained material is found retained in terrestrial deposits to levels never seen before in Earth’s preceding ~4 billion years of history.

Testing the mechanism in process-driven models

The dynamic evolution of CO2 and O2 in Earth’s early atmosphere is hindcasted with global biogeochemical models for the long-term evolution of the carbon cycle, such as the COPSE model. We modified the model forcings to fit observational constraints including the new CO2 data. Three factors were modified relative to previous models, including 1) more widespread vascular vegetation in the Silurian, 2) higher weathering rates in the Silurian and no increase when trees evolved, and 3) volcanic CO2 emissions scale with subducted carbonate platforms rather than the cumulated length of mid-oceanic ridges, as previously thought.

The emerging new view on the effect of plant colonization on Earth’s atmospheric composition is, thus, consistent with available paleo-CO2 and paleo-O2 records, but we also stress that there are still no robust observational atmospheric CO2 constraints prior to 410 Ma. Therefore, the idea that the emergence of shallow shrub-like vascular ecosystems caused substantial CO2 removal is a theory consistent with the record of atmospheric oxygenation, but further empirical support from robust paleo-CO2 barometers is needed.

The article „Low atmospheric CO2 levels before the rise of forested ecosystems“ is published in Nature Communications. 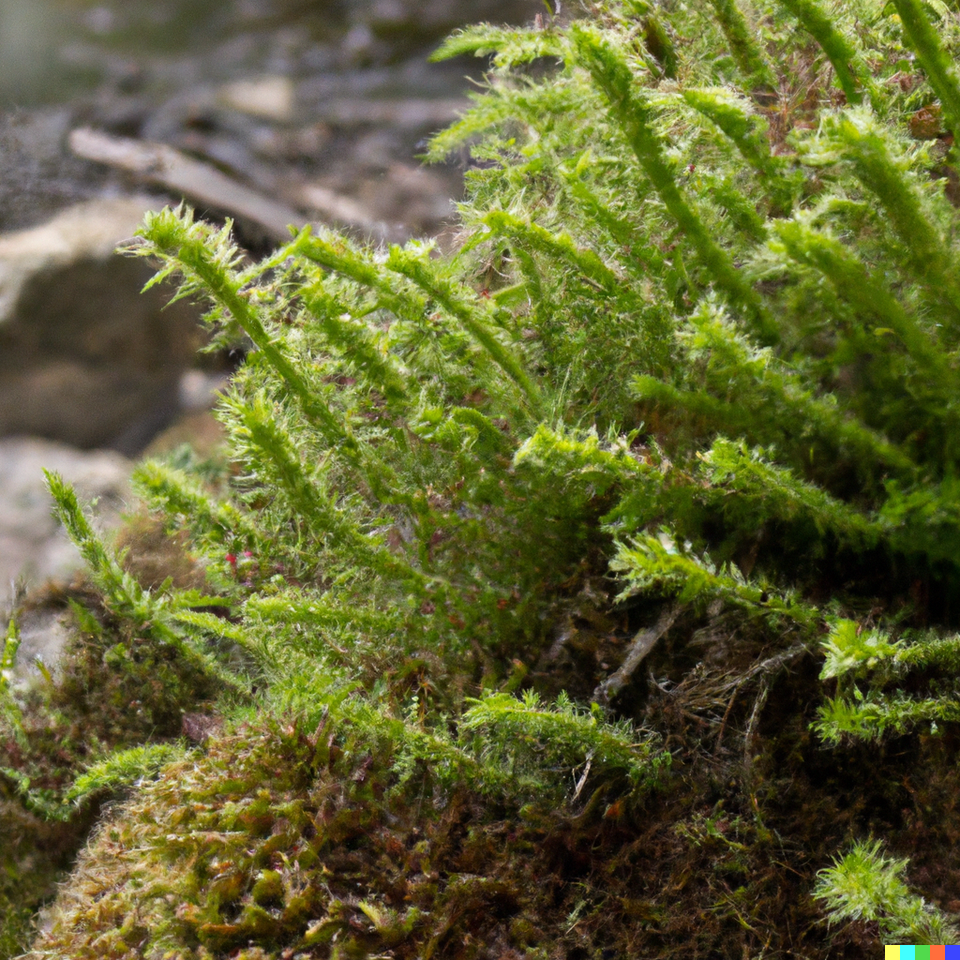 The atmosphere contained only slightly more CO2 than today 410-380 million years ago, and this did not change much when trees emerged ~385 My ago. This rejects a long-standing paradigm that the evolution of trees with deep root systems led to massive CO2 removal.