Vertical transport of giant primary biological particles, such as pollen and spores, seemed to be overestimated. Now we show vertical profile with seasonal data, with canopy debris as the source of most of the giant bioaerosols, suggesting the limited dispersal of these particles.
Cybelli and Philip
2 contributors
Like Liked by Evelina Satkevic and 2 others
0

By Cybelli Barbosa and Philip Taylor

Primary biological aerosol (PBA) particles are abundant in the atmosphere and their suspension pattern near ground level is well documented for temperate regions. Unfortunately, much less is known about PBA emission from tropical rainforests.

Coarse and giant PBA, such as pollen grains and spores, carry genetic information for pollination, colonization and infection. To date, atmospheric transport of these PBA has been mostly inferred from ground-based observations. It is thought that pollen and large spores might undergo long distance transport and influence local precipitation processes.

To analyse the PBA composition in the near-pristine atmosphere of the rainforest in the central Amazon, we used tower-based air samplers and collected particles from 5 to 500 um in diameter, and individually identified them with a light microscope. This allowed us to categorize the particles into the main groups: pollen, spores (fungi, fern, bryophyte), canopy residues (leaf/wood parts, glands, insect parts, amorphous plant and fungal debris), and non-organic particles.

Getting to the site:

The research site is located in a remote area of the Central Amazon rainforest. It is required transportation along a pavement road + a dusty road (like a rally) + on a river (by boat). After 6 to 8 hours on this journey, we could finally reach the site, sleeping in hammocks during the entire sampling period.

Using a 320m tower and across 5 years we performed 8 intensive sampling campaigns from the canopy to 300m height, during both the wet and dry seasons. Climbing a 80m and a 325m tower every day, regardless the warm sun (36°C in average) or the heavy thunderstorms.

During the sampling period there were countless issues with transportation, equipment failure and consumable delays, but we managed it.

With the samples collected, there was another challenge: to visually inspect each one and categorize each particle under the microscope. A tremendous effort and several months later, almost 500 000 individual particles were double checked and identified for this work.

Some surprises show up while analyzing the results due to the unique sampling conditions:

There was much lower than expected amounts of coarse and ‘giant’ bioaerosols high above the Amazon rainforest given their abundance in the atmospheric roughness layer just above the canopy. This suggests limited long-range transport and cloud interaction.

However, peaks in pollen abundance above the canopy coincided with increased wind speeds from the outflow of convective thunderstorms. Not surprisingly, precipitation and increased relative humidity had a strong negative influence on the vertical distribution of bioaerosols.

Trees released more than just pollen and spores. Canopy debris that consisted of fragments of plant and fungal tissue dominated the coarse and giant PBA, followed by fungal spores, pollen grains and fern spores. This is likely to also occur in temperate zones where any identification of this class of bioaerosol is hampered by similar looking amorphous soil and anthropogenic dust particles. Some of this debris contains DNA that would show up in genetic analyses and readily be mistaken for pollen or spores.

Few bioaerosols showed any rupture or damage and thus, did not directly contribute to secondary aerosol formation. This is an opposite pattern to temperate zones, according to the literature.

With a ‘limited’ transport range, the large fungi spores and pollen particles have a strong local influence on rainfall periods for this tropical area. This might guide future studies on how the giant particles are considered in the equation regarding precipitations cycles. 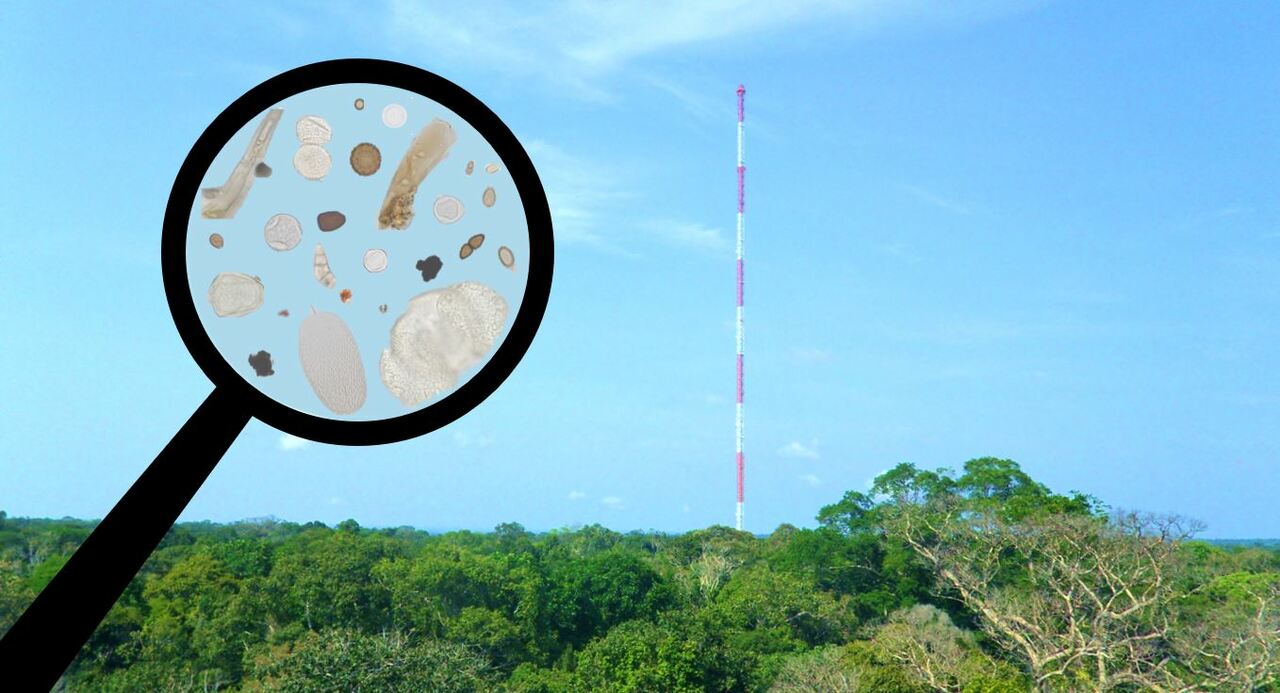 Vertical transport of giant primary biological particles, such as pollen and spores, seemed to be overestimated. Now we show vertical profile with seasonal data, with canopy debris as the source of most of the giant bioaerosols, suggesting the limited dispersal of these particles.